Los Angeles Times gives a nice pat on the head to LGF's Chuckie Johnson.
Stabbing your former friends and allies in the back and getting in line with Obama and the neo-Marxist elites has its perks, isn't it Chuckie? 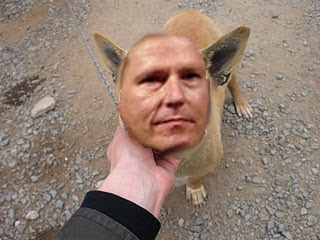 Too bad we did not forgot C.J. calling the LA Times "unethical and malfeasant" when the same fish wrap who is publishing today this puff piece on him, in 2008 refused to publish a report about Obama meeting with Palestinian activists - some of them suspected of very close ties with Hamas.

It's pretty clear Chuckie politics of today went further left and more jihad appeasing than those of his former nemesis, Daily Kos' Markos Moulistas. It is also very, very hard to believe C.J. was not afraid in the past when he was receiving death threat emails from Internet jihadists for posting pro-Israel/anti Palestinian material but somehow, all of sudden the Lizard Emperor chickened out and bought a new home in a safer "gated community" where the paid assassins of Pam Geller and Glenn Beck cannot reach him.
I believe we all need to congratulate C.J. for becoming a new home owner. That's the American dream come true folks, right? However, I really can't make up my mind: is the stench emanating from Chuckie's new "safer" home smelling like Saudi money or Soros money?
Posted by Transsylvania Phoenix at 7:49 AM