Wide Receiver - Mexican army and police was in the loop about Wide Receiver. They took over the surveillance of the gun smugglers after they crossed with the guns in Mexico.
Fast & Furious - Mexican authorities were kept in the dark by the ATF and the US DOJ. They had no idea about Fast & Furious and the fact that guns provided to gun smugglers by the American authorities were "walked" in Mexico into the hands of drug cartel murderers.

Wide Receiver - When a small number of guns (30-40) were lost due to the malfunctioning tracking devices and / or because the gun smugglers figured out they were watched from a surveillance airplane flying overhead and learned how to take cover and evade, the operation Wide Receiver was immediately aborted and cancelled.
Fast and Furious - Operation continued even after ATF and DOJ lost track of all 2,000 guns sold to Mexican drug cartels

Wide Receiver - The operation was planned in such a way the gun smugglers and their cargo were kept under surveillance step by step, from the gun store to the US/Mexico border, across the border into Mexico and to their final destination: the hands of the drug cartel killers. This led to 1,400 arrests made in joint operations by the Mexican authorities and DEA and ATF agents. No lost Wide Receiver guns were recovered at crime scenes in Mexico or the US.
Fast & Furious - The operation was planned to let the guns go without any surveillance. Guns were supposed to be recovered at the murder scenes. One of the 150+ murder scenes where Fast & Furious guns were recovered was that of US border patrol agent Brian Terry; another one was the murder scene of ICE agent Jaime Zapata. So far DOJ and ATF didn't came with any explanation about how they were planning to make arrests of the drug cartel murderers BEFORE THEY KILLED PEOPLE with the Fast & Furious guns, and how they were supposed to do those arrest in Mexico without the Mexican authorities knowing anything about this operation.
Fast & Furious results: 300+Mexican citizens murdered; 2 US Federal agents murdered.

Posted by Transsylvania Phoenix at 8:33 AM No comments:

...then writes a blog entry in which he calls Rep. Alan West and his GOP colleagues "apes".

Maher's IQ can make an aphid's intellect look towering in comparison. I will now end this post with a quote from one of the commentators on Maher's blog:

here is a suggestion: lock yourself in a room with Col. West, guarded by MPs, talk your trash to him personally (don't forget to tell him you think that because he is a Republican he is nothing more than an ape), and let the best man exit the room.

Billll Maher: the human excrement who evolved in a failed comedian, proving that Darwin's theory of evolution is right
Posted by Transsylvania Phoenix at 2:40 PM No comments:

This should convince anyone to quit smoking...

...or at least carry a box of matches if they can't quit:


This gun is about as tiny as it gets. Gizmodo explains that the 4mm bullets are about the size of Tic Tac and wouldn’t carry much of a punch. We wouldn’t want to be on the receiving end of one of these, but at the same time you can’t be certain that this thing is going to deliver a kill shot.

It’s a novelty item more than anything else, though it does have some serious self-defense potential. Could you imagine carrying one of these around in a state where concealed carry is banned? Cops wouldn’t even give it a second glance.

More
Posted by Transsylvania Phoenix at 6:20 PM No comments:

Tell on Me: The ballad of US agents

A song to the Leaker-in-Chief from America's friends, based on the immortal song of Ben E. King, "Stand by Me."
Produced by Latma, Israel's premiere satire group

Posted by Transsylvania Phoenix at 8:52 PM No comments:

A Story Forgotten Needs To Be Told - As Shocking As It May Be: The (Post)-War Crime Of The Allies

It is the story about the forced deportation of hundred of thousands of Cossacks from Western Europe (and according to some witnesses even from the US) to face execution squads and death in extermination camps in Stalin's USSR.

Most deportees (without hesitation I would call them the fortunate ones) were shot right on the spot after being handed over to the KGB units by the THE US AND BRITISH TROOPS; the less then lucky deportees were first tortured then shot or hanged, or tortured then sent to die a slow death in the Siberian Gulags.
The most shocking and sickening fact: many of the deportees were not even Soviet citizens; they were refugees who fled during the communist revolution and settled in the West between 1918-1921. Many of them were the children of those refugees, born and raised in the West. Yet those children and their mothers and fathers were sent to USSR to face Stalin's execution squads.

From  A FOOTNOTE TO YALTA:


The fate of these Russians was one of the best kept secrets of the war. As many as could surrendered to American and British forces, trusting that they would eventually be able to settle somewhere outside the Soviet Union. But in February 1945, at the Yalta conference, Roosevelt and Churchill agreed to Stalin's demand that they be handed over to him. The anti-Soviet Russians in the hands of the western allies would therefore be betrayed. To carry out the repatriation order, American and British servicemen often had to resort to deception and brute force. No one doubted what was in store for the Russians once they were in Soviet hands. Many were executed on the spot. 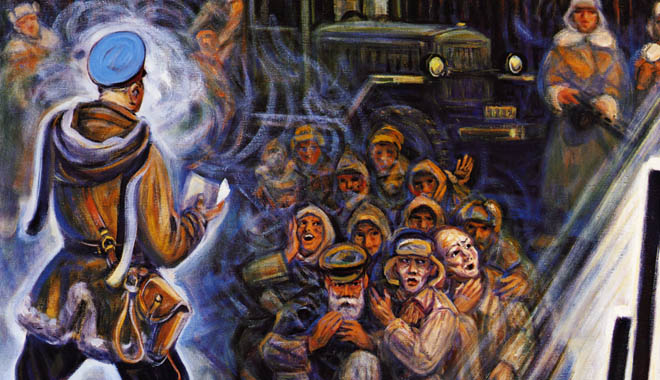 In some instances, Allied guards responsible for turning over their prisoners could see their bodies hanging in the forests where the exchange took place. Some were transferred on the same boat that had brought the British delegation to Yalta a few months previously. They were shot behind warehouses on the quay side with low flying Soviet planes circling overhead to help drown the noise of the rifle fire. Many returned prisoners were tortured before being shot. The remainder disappeared into prison camps for long sentences, receiving the worst treatment of all the Gulag's inmates. Needless to say all were immediately stripped of the new winter clothing and personal equipment that had been generously issued to them by the British in response to the cynical demands of Soviet liaison officers. American and British officers were the appalled eyewitnesses to many desperate acts of suicide by Russian men and women who preferred their own death and that of their wives and children to falling into the hands of the Cheka/NKVD/GPU/KGB.
...................
The more we think about these seven minutes of official film the more disturbing the questions become. Five weeks earlier, Russians interned at Dachau, site of the notorious Nazi concentration camp and not far from Plattling, had resisted their repatriation with a ferocity that stunned American military police, resulting in at least ten suicides. Did someone have the idea of using a film clip to quell rumors about the difficulties the American army encountered in the forcible repatriation program? Did they think they might show the clip in other camps whose inmates were also scheduled for deportation? The film material strongly suggests that it was intended to give the impression that the repatriation policy was being conducted without incident. Continues here.


There is a lesson to be learned here. Just because you live in a democracy doesn't mean you're safe from being put in a cattle wagon heading out to an extermination camp.
Posted by Transsylvania Phoenix at 8:53 AM No comments: