Raped So They Could Be Legally Executed

This will make you sick: in Iran, it is against the law for young virgin girls to be condemned to death and executed. A former Iranian Basij militia member confesses how he was granted by his superiors the "privilege to marry" young girls and rape them the night before the execution so they could be "legally" killed the next morning.

This is just an except, for the full article follow the link at the bottom:

Yep, let's have talks and negotiate with these animals. Did Obama apologized to them yet?
Posted by Transsylvania Phoenix at 10:36 PM No comments: Here is a real Rara Avis: a liberal newspaper from San Diego publishing an impartial , unbiased and well researched article on California UOC (Unloaded Open Carry) movement.
Kudos to every participant in the interview and kudos to Miss Rosa Jurjevic, she proved herself to be is a great gal and an honest journalist.

Now, why don't we have the same honest and impartial type of journalism practiced at LA/NY Times, CNN, CBS and the rest of the major media outlets?
Is it that hard for the big name newspaper editorialists and TV anchors to do a little research on this issue, leave their fears and personal bias aside and write objective articles based on real information, not anti-gun propaganda?

Here an except of the article, please follow the link at the bottom to read it in its entirety:

It’s a beautiful day in Pacific Beach as Nate approaches the bronze pelican statue on the boardwalk. He’s slight and blond, spectacled and clad in jeans and an army-green T-shirt. He squints. The sun’s so bright overhead that he is prompted to spray a fine mist of sunblock over his fair skin to stave off a burn.

I’ve never met Nate before, but I know it’s him (a) because I’ve seen his picture and (b) due to the handgun that sits on a holster against his hip. I’m about to get up from where I’m sitting and introduce myself when someone else beats me to the punch. A scraggly-looking beachgoer, a man of indeterminable age because he is so weather-beaten, approaches.

“What’s that for, bro?” he asks, pointing in the direction of Nate’s gun, a Taurus Tracker .44 Magnum revolver.

Before Nate can answer, the man continues.

“There are surfers at the beach looking to party, and you show up with that? That’s not right. Love life! Be mellow!”

This is when I walk up and introduce myself. The beachgoer looks at me for a moment with wild blue eyes, then looks back at Nate, as Nate is beginning to explain what he will have to reiterate time and time again to concerned and/or interested parties: he is open carrying.

The term “open carrying” refers to one who is in possession of a holstered, unloaded firearm on his or her person, displayed in plain view. Nate begins to explain the legalities of this to the beachgoer when Sean approaches, video camera in tow. In shades, a green shirt with double-breast pockets, green cargo pants, and a Sig Sauer P229 holstered on his hip, Sean looks not unlike a police officer.

The beachgoer does a double take.

“Another one!” he exclaims, as Sean greets us warmly.

The beachgoer, incredulous, excuses himself — with one final stare — to go “get baked.”

To read the rest of the article go here: They Carry Guns

UPDATE!
Nate, the UOC guy featured in the Reader article will be interviewed tomorrow 07/21 on the local talk radio station starting around 8AM Pacific Time on AM 600 KOGO. This radio station is the home of Rush Limbaugh and Sean Hannity in San Diego. You can listen to the interview on the Internet live or podcast here
Posted by Transsylvania Phoenix at 8:55 AM No comments:

From BFA here is another report about another "grassroots" anti Second Amendment organization - in reality just a gravy train for those who run it.

Quote:
"If we have more use of guns, then we're going to have more people who are injured and die."
-- Toby Hoover, Ohio Coalition Against Gun Violence, when asked in April 2004 about her predictions about Ohio's newly-implemented concealed carry law

Toby Hoover:what a predestined name! Somebody at the Joyce Foundation should have thought of that.
Posted by Transsylvania Phoenix at 7:54 AM No comments:

After the Heller decision some speculated the anti-Second Amendment groups will start to lose credibility and funding. This is the first confirmed victim and it has folded up based on losing funding from probably the primary source of anti-gun funding - The Joyce Foundation.
H/T Hoffmang

An Iowa group once active in lobbying for gun control has disbanded after losing a major grant. The November 1st coalition began after the November 1, 1991 shootings on the University of Iowa campus and was later renamed Iowans for the Prevention of Gun Violence.

U-I professor Rex Honey served on the board of directors and hopes to revive the group. "I will try in autumn to get some students involved at the University of Iowa, given that the campus was what started our organization in the first place," Honey said. "So, it's not that we don't think there's an issue any longer."

No more money...Honey?
Honey says most recently the group has relied on volunteers to lobby the legislature. "There was a grant with the Joyce foundation for a period of close to a decade from the mid 90s well into this decade, and that funding did end," Honey said.

"That meant we could no longer hire staff, so everything was done on a volunteer basis." The organization recently helped stop a bill to loosen restrictions on county officials who issue gun permits.
-----------------------------

Posted by Transsylvania Phoenix at 8:20 AM No comments:

On the heels of the U.S. Supreme Court's recent ruling on the 2nd Amendment which reinforces every American's right to bear arms, this show is a fly on the wall at "The Shootist" gun store in Englewood, Colorado, where salesman Josh Ryan is always in full-on pitch mode -- and the steady stream of customers never stops. And for every gun sold by this expert gunslinger at this family-owned store, there's a fascinating story and a fascinating buyer to tell it to him: the new parent who wants to protect his family; the teenager who's an expert hunter; the 30-something woman who feels a little more at ease with a revolver in her purse and the avid collector who simply has a fascination with guns of all kinds. There's even a shooting range in the basement to try out the merchandise before completing the sale. The show will debut in 2009.


Posted by Transsylvania Phoenix at 9:08 AM No comments:

As seen last night, on the beach in Huntington.
It was freezing cold and the wind was blowing relentlessly. Talk about global warming.

It was nice, but too damn cold and windy to be enjoyable. As for the going home traffic...it took us one hour to drive the six mile stretch of Beach blvd to the 605 Freeway. If I add another 40 minutes walking and carrying our chairs, cooler and other items we brought with us back and forth from the beach to the place we left our car ... I would not recommend this type of 4th of July celebration to anyone.
Posted by Transsylvania Phoenix at 11:21 AM No comments:

Remember Great Britain? It's that civilized and enlightened liberal paradise where a decade ago and in the name of public safety people were asked to surrender their guns?
It was "for the children" of course. But how's the liberal anti-guntopia worked out so far for the Brits you may ask?

The most violent country in Europe: Britain is also worse than South Africa and U.S.

Britain's violent crime record is worse than any other country in the European union, it has been revealed.

Official crime figures show the UK also has a worse rate for all types of violence than the U.S. and even South Africa - widely considered one of the world's most dangerous countries.

The figures comes on the day new Home Secretary Alan Johnson makes his first major speech on crime, promising to be tough on loutish behaviour.

The Tories said Labour had presided over a decade of spiralling violence.

In the decade following the party's election in 1997, the number of recorded violent attacks soared by 77 per cent to 1.158million - or more than two every minute.

The figures, compiled from reports released by the European Commission and United Nations, also show:

The UK has the second highest overall crime rate in the EU.
It has a higher homicide rate than most of our western European neighbours, including France, Germany, Italy and Spain.
The UK has the fifth highest robbery rate in the EU.
It has the fourth highest burglary rate and the highest absolute number of burglaries in the EU, with double the number of offences than recorded in Germany and France.
But it is the naming of Britain as the most violent country in the EU that is most shocking. The analysis is based on the number of crimes per 100,000 residents. Shadow Home Secretary Chris Grayling said: 'This is a damning indictment of this government's comprehensive failure over more than a decade to tackle the deep rooted social problems in our society, and the knock on effect on crime and anti-social behaviour.

'We're now on our fourth Home Secretary this parliament, and all we are getting is a rehash of old initiatives that didn't work the first time round. More than ever Britain needs a change of direction.'

The figures, compiled by the Tories, are considered the most accurate and up-to-date available.

But criminologists say crime figures can be affected by many factors, including different criminal justice systems and differences in how crime is reported and measured.

In Britain, an affray is considered a violent crime, while in other countries it will only be logged if a person is physically injured.

There are also degrees of violence. While the UK ranks above South Africa for all violent crime, South Africans suffer more than 20,000 murders each year - compared with Britain's 921 in 2007.

Experts say there are a number of reasons why violence is soaring in the UK. These include Labour's decision to relax the licensing laws to allow round-the-clock opening, which has led to a rise in the number of serious assaults taking place in the early hours of the morning.

But Police Minister David Hanson said: 'These figures are misleading.
Levels of police recorded crime statistics from different countries are simply not comparable since they are affected by many factors, for example the recording of violent crime in other countries may not include behaviour that we would categorise as violent crime.

'Violent crime in England and Wales has fallen by almost a half a peak in 1995 but we are not complacent and know there is still work to do. That is why last year we published 'Saving lives. Reducing harm. Protecting the public. An Action Plan for Tackling Violence 2008-11'.'

The timing of the Europe-wide violence figures is a blow for Mr Johnson, who will today seek to reassert Labour's law and order credentials.

In his first major speech on crime since becoming Home Secretary, Mr Johnson is expected to promise a concerted crack down on antisocial behaviour.

He wants to set up a website to allow the public to see what is taking place in their neighbourhood, such as the number of louts who have been served with Asbos.

Mr Johnson is also known to support early intervention to stop children going off the rails.

Posted by Transsylvania Phoenix at 8:30 PM No comments: 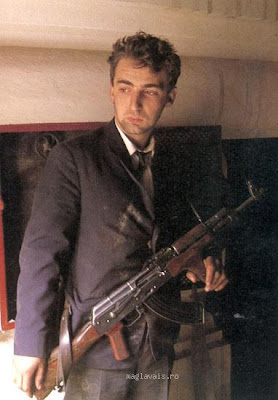 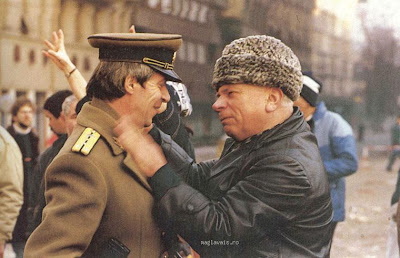 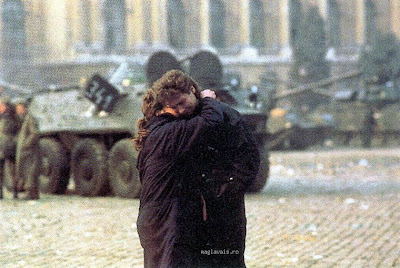 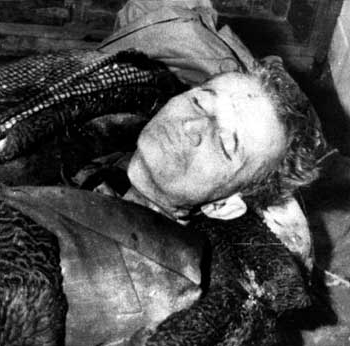 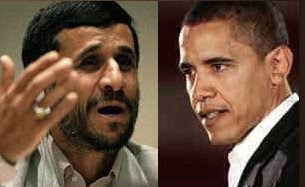 Who will confront evil this time around?

Posted by Transsylvania Phoenix at 10:44 PM No comments: