News From The Gun Grabbers Utopia Across The Pond

Britain: ten years after declaring virtually all types of firearms illegals and disarming its law abiding subjects, the socialist government of the UK is facing reality:

Culture of violence: Gun crime goes up by 89% in a decade Meanwhile, in the "violent, obsessed with firearms" America where "practically you can buy a gun as easy you but a loaf of bread" the crime rate went down every single year since 2002 - the year when most States started passing laws allowing law abiding citizens to carry concealed handguns. Only in the first part of 2009, the FBI reported a 10 percent drop in murder and manslaughter.

Hear that Brady? Hear that Obama? Hear that Schumer, Feinstein, Kerry, Pelosi and the rest of you - gun grabbing, Constitution trampling, anti-American POS liberals?
Posted by Transsylvania Phoenix at 9:50 AM No comments: The Grand Lizard Master (also holding the tiltles of First Lord of the Turncoat, Lord Chief Global Warmist, Commander-in-Chief of The "Ban The Christians" Forces, Lord High Admiral Of The Liberal Bottom-Sinking Fleet , Archbishop of Obama Asskissing Church, Lord Mayor Of Palin Smearville and Lord High Everything Else - a.k.a. Charles Johnson) is jumping today to Obama rescue (again) with another incredibly dumb piece in which is attempting to save the day for his Saviour by saying that:

All of the wingnut blogs are screaming that in his statement about the Northwest 253 terror attack, President Obama called the alleged terrorist an “isolated extremist.”

But what exactly did Obama said about the exploding underwear terrorist?
Well, he said exactly this: the attacker is an isolated extremist. Here is the video:

Make note Obama not only called the jihadi scum "isolated extremist" like he acted all by himself but he also refused to call him an ISLAMIC TERRORIST.

So why is LGF's Chucky Johnson getting his panties in a wad about Fox News and conservative bloggers unloading on Obama? Because you see, in the same speech, President Obama also said this:

“A full investigation has been launched into this attempted act of terrorism, and we will not rest until we find all who were involved and hold them accountable.

Wait a minute Chucky! So which one of the two contradicting statements issued by your Savior Obama in the same speech is true? Was the underwear bomber an isolated extremist (like in all by himself, lone wolf, sudden jihad syndrome case) or was he part of of a larger Al-Quaeda plot in which case he is NOT just an "isolated extremist" but a terrorist acting on behalf of the most dangerous and deadliest enemy of America?

Obviously, Charles doesn't find Obama's two exactly opposite statements to be a problem. He's too busy competing with Markos Moulistats for the first place in the Sucking Up to Obama marathon.

I agree that he didn't mean that the terrorist acted alone. So what the heck DID he mean?

To which Chuckie gives a Moron of the Year Award answer:

Well, if you stop trying to find something evil in it, his statement is amazingly clear: the terrorist was "isolated" on the plane, as in, he was the only terrorist on the plane.

Uh...alright. I guess if you stop trying to find excuses for Obama, Chuckie's statement is amazingly clear: "I, Charles Johnson am an Obama ass kisser" as in "I am the only one who believe the totally ridiculous, laughable apologies I am making for my Saviour"

Chucky took notice of this blog entry and of course is throwing a hissy fit:

Charles #21
This is the kind of sick crap that's all over the right wing blogosphere:
[Link: transsylvaniaphoenix.blogspot.com...]
The blogger who posted this is a blatant liar who tried to deny he posted a comment at LGF advocating mass deportations -- I outed him as a liar, and he just continued lying.

Please note two things:
1. The Grand Poobah Chuckie doesn't address the issue at hand which I must repeat, it is his laughable and ridiculous excuse making and ass kissing for Obama - not even tangentially.
2. He is repeating the same falsehoods and made up accusations he made about me AFTER he turned his political stance hard left and into the Daily Kos / HuffPo camp, and more than one year AFTER he claims I made the offensive statement he is talking about.

Hey Chuckster...no really, let's see if you have an answer for this too: if what you are accusing me of saying is true, then why did you wait for an entire year to ban me? Oh, I know...I must have been an "isolated extremist"

Not holding my breath for an honest answer coming from this moron.

Linked to this post:
Side Lines
American Digest
Free Republic
Posted by Transsylvania Phoenix at 8:09 AM No comments:

For English subtitles: on the video screen there are two little boxes on the bottom right. Put your mouse of the one with the arrow and anoth set of boxes pops up. One has a "CC" in it for close caption. Click it and the dialogue should play.

Same crew with a "different" take on another movie: Star Wars 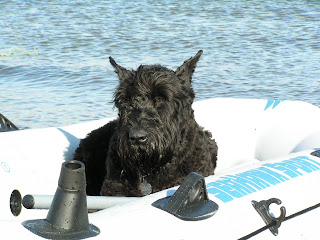 George my 9 year old rescued Giant Schnauzer is now fighting for his life. He was prescribed Previcox by his vet for his arthritis pains. Following the vet recommendation I administered the tablets with food. After only two days and two tablets he started projectile vomiting, drinking a lot of water, being dizzy and manifesting all the symptoms of poisoning.

I Googled the name of the drug "Previcox" and "side effects" and I wish I would have done it BEFORE giving giving George the drug. To my astonishment, there are hundreds and hundreds of personal testimonies written by people who administered their dogs the same drug, their pets manifested exactly the same symptoms like my George and finally, had their dogs ending up dead or barely escaped death with irreversibly damaged stomachs, liver, kidney or hearts.

From an article published in 2006:

"The FDA has released information concerning non-steroidal anti-inflammatory drugs for pets -- including Metacam, Deramaxx, Previcox and Rimadyl -- that shows they have been connected to 22,000 cases of illness in dogs, almost 3,000 of which were fatal."


What causes death by Previcox? Acording to one of the hundreds of testimonies I found on the Internet written by a dog owner who lost his pet to Previcox poisoning,

"The Previcox apparently starts first by forming ulcers on the stomach and as more Previcox is administered it becomes ulcer upon ulcer until the stomach acids (full of Previcox) begin to leak out. It seams it first attacks the kidneys and liver. Then it begins to destroy all the protective membranes that are protecting all of the other organs. In the end it makes its final attack on the heart."

Previcox is the veterinary version of the Vioxx (prescribed for arthritis in humans) and it is made by Merial which is a branch of Merck. As you may already know, Vioxx was pulled off the market by the FDA after thousands of people ended up dead after taking the drug. Yet, the same company continues to push Previcox which has the same risks and causes deaths in animals.

Before starting your dog on Previcox I beg you: please, if you love your dog go to http://www.k911.biz/Petsafety/PrevicoxEmails.htm and read Rowdy's tragic story as well as other hundreds and hundreds of emails sent by other pet owners who tragically killed their pets by poisoning them with Previcox.

George vomited for the third time today and he is very weak, shaking...refused the yogurt but my wife cooked a little beef and carrot soup and gave it to him a few minutes ago, licked the bowl. We expect he will vomit it shortly but that's all we can do until tomorrow morning. We put plastic bags all over the bedroom floor, makes it easier to clean. We'll see what happens until tomorrow when the vet office opens.
I am royally pissed on the vet who did not warned me about the potential side effects and on the company who makes and pushes such a dangerous drug which is banned for humans; if George dies, I'll make taking this drug off the market one of my life goals. I just learned another side effect is extreme aggression (probably caused by pain) and read about a little girl disfigured by a dog who was given Previcox. Dog owners need to know what the risks associated with this drug are. I will start a website and put all the effort and Internet knowledge I am capable of to make it pop on top of every Google search when people are searching the name of this drug.

UPDATED 10-23-2014 (five years after I published this blog entry)
The website that had Rowdy's story as well as hundreds of other testimonials is no longer online. I managed to find some archived internet pages of that website using the Wayback Machine. You can read them here: https://web.archive.org/web/20140701032307/http://www.k911.biz/Previcox_Emails/main.php
Posted by Transsylvania Phoenix at 9:59 AM 183 comments:

The days before the liberal brainwashing of the American people:

Today, the same company produces the a toy symbolizing the "emancipation" of the women in the Islamic world: Burkha Barbie Posted by Transsylvania Phoenix at 10:58 AM No comments: