They compare him with Iliescu, Romania's corrupt neo-communist President from the 90's. And believe me, that guy isn't somebody you want to be compared with.In 1990 Iliescu brought to the capital Bucharest several train loads of miners from the poorest, most uneducated region of Romania. He told these violent brutes that students, university professors, other intellectuals, members of opposition Parties and artists who were gathered in the heart of the capital of Romania for a peaceful anti-communist protest were in fact druggies, fascists and enemies of the State paid by foreign powers to overthrow the Iliescu regime. He asked them to help the police to "clean-up the capital from the traitors and enemies"What followed is one of the most shameful chapters of Romania post revolution history.Peaceful protesters were beaten by a mob of thousands of miners with chains, shovels, pickaxes and other tools miners use in their trade; an unknown number of people were killed and buried in unmarked graves; the University of Bucharest was ransacked, rare books burned, scientific research destroyed; headquarters of opposition Parties were looted and burned down; people on the streets were targeted and beaten simply because they wore glasses or a beard, thus they looked like intellectuals or students; women were kidnapped and raped from streets in plain daylight.Unspeakable horrors happened during those days Romanians now call "The Mineriada" Here are a couple of images from those days: 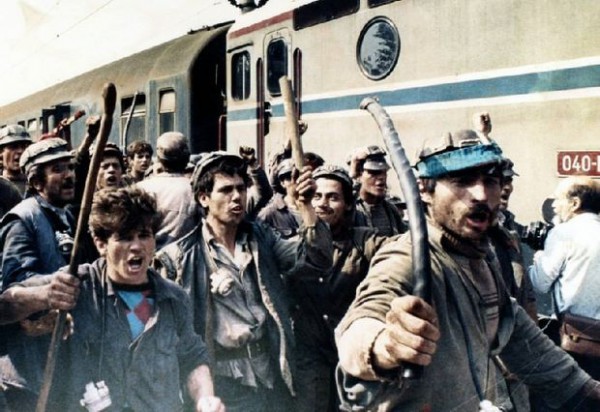 At the end of three days of terror, President Iliescu gathered the miners who helped him crush the opposition pro-democracy protest and thanked them "for restoring the peace and helping with cleaning an planting trees and flowers in the University Plaza". Here is a propaganda photo: Posted by Transsylvania Phoenix at 9:52 AM

There's nothing I can add to the commentary regarding the present president. All that he has turned out to be is precisely what many millions of us said was inevitable, long before he was elected. Responsibility for his presidency fall not just at his feet but also those who voted for him. His election and re-election also must be credited to a failed opposition.

The comparison with the 1990 Iliescu Mineriada was very interesting. Studying Mr. Mike Rapport's book 1848: Year of Revolution just last night where he made mention of the 1846 Galacian Slaughter, the Peasant Uprising used by the Habsburg's to crush an organized Polish democracy movement. It seems those the author Mr. Rapport quoted as saying the 1846 uprising was "the last jacquerie or peasant uprising in European history" were very wrong.

“…students, university professors, other intellectuals, members of opposition Parties and artists… were gathered in the heart of the capital of Romania for a peaceful anti-communist protest…”

Wow. Romania must be like Bizarro America. Students, professors, artists, and intellectuals here are themselves the violent socialist rioters.